Canucks vs Blues 6-2 Game Domination, 4-2 Series Victory, Bring On The Next Round

The Canucks vs Blues 6-2 scoreline didn’t hide how well Vancouver played. They were the more aggressive team from the opening puck drop and they didn’t let up after scoring 1,2,3 or even 4 goals. The defending Stanley Cup Champions had no answer for the young and fast Canucks.

No changes for the Canucks as they skated out the same lineup that came back to win 4-3 in game 5. Travis Green once again shuffled the lines to force the Ryan O’Reilly line to focus on some and not all of the Canucks top skill players.

Craig Berube made several changes to his game 5 lineup. The most significant being Jordan Binnington back in net for Jake Allen. Vancouver fans were able to feast on this decision more than I do on Thanksgiving and Christmas combined. there wasn’t any food coma or shame this time so that felt nice.

The Canucks vs Blues 6-2 victory started early and was held on by some great defensive work and goaltending by Jacob Markstrom.

It didn’t take long for Vancouver to open the scoring. They came out skating fast and checking hard as they did in game 5 to start. This time it would be a more complete effort. The 4th line, thanks to some hard work by Tyler Motte, Jake Virtanen, and Jay Beagle would start things off and set the tone for the Canucks and Blues game 6. Beagle was able to walk in and fire it past Binnington and the Jake Virtanen screen for the 1-0 lead 3:45 into the game.

Vancouver would keep up the attack outshooting the Blues 13-4 10 minutes into the period. If you expected the Defending Stanley Cup Champions to go away than you might have been drinking a bit too early. The Canucks were forced to kill off penalties by Tyler Motte for holding on David Perron at 12:08 and than a late one by Jay Beagle.

Vancouver would kill things going into the first intermission with the 1-0 lead. They were being outplayed in the second half of the first period taking penalties and not getting a shot for the final 10:24 of the period. But one thing they did have was a 1-0 lead.

Canucks Amp Things Up In The Second Period

After killing off the rest of the penalty to start the period Vancouver would strike again. Some more great work by the 4th line would lead to the Canucks second goal. Brandon Sutter would get the first of his 3 assists on the night 2:09 into the second period. After his hard work down low he was able to get it to Antoine Roussel who beat Binnington to make it 2-0.

Things kept coming for Vancouver as they were able to get a third and fourth goal. First, it was a rush by the Canucks led by Pettersson who worked it into the zone and found Hughes. Some smooth-skating from Hughes and he worked it back to Petey. He found Sutter at the side of the net who fed Troy Stecher who picked his spot perfectly. To note this sequence took less time than it took me to type it out!

Canucks and Blues NHL Playoffs was getting out of hand and quickly. Things would go from bad to worse for St. Louis. Roussel drew a slashing call against Oskar Sundqvist and the powerplay would go to work. Hughes would get his 10th point of the playoffs and Pettersson would get his 13th in 10 games. The Blues would make a goaltending change and bring in Jake Allen much to the delight of everyone cheering for Vancouver.

Bye, Bye Binnington! Canucks social media is starting to get it but not as much as @Brandonjbro on Twitter. So happy all the trolling didn’t bite the Canucks in the butt. I could not have dealt with that as I was getting nervous enough in the 3rd when St. Louis started scoring.

3rd Period And The Next Round

The Canucks vs Blues 6-2 would finish off the defending Champions. It was a nervous 3rd period at times. Despite still being up 3 goals when Jaden Schwartz scored to make it 4-1 I did get an odd discomfort. Vancouver was able to hold things down for the mid part of the 3rd period before reclaiming the 4 goal lead.

Tyler Motte would get into the action to make it 5-1. Sutter got his 3rd assist on the goal. The blues would once again cut it back down to a 3 goal lead but once again Tyler “Frickin” Motte. Dammit, YouTube I said Frickin! Don’t censor my stuff! Would score the empty net goal for the Canucks vs Blues 6-2 victory.

Canucks vs Golden Knights Bring On The Conference Semi-Finals

Vancouver doesn’t get any rest after the win against the St. Louis Blues. The Western Conference Semi-Finals start for the Canucks and Golden Knights On Sunday night. If you thought the Canucks and Blues NHL Playoffs were exciting I can only imagine what this series is going to be like.

Make sure to follow me on Twitter for the latest Canucks news and updates before game one against the Golden Knights on Sunday. And make sure to check out Sports Talk Lines YouTube Channel for the next episode of the Unnamed Sports Show Point 5. Canucks are still playing so the show will keep coming at you! 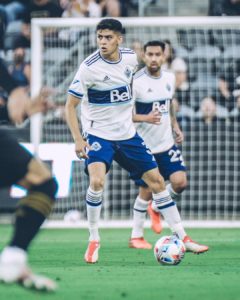 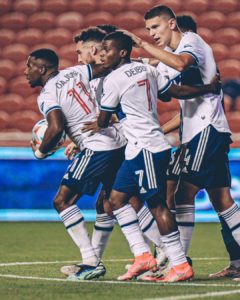