Rams vs Seahawks 2019, Which Teams Will We See?

Rams vs Seahawks 2019 are coming off of two different Sundays. The Seattle Seahawks will look to build off their easy 27-10 win against Arizona Cardinals last week, while the Los Angeles Rams will look to bounce back against a loss to the Tampa Bay Buccaneers that saw them giving up over 50 points for only the second time in the Wade Phillips Era, losing 54-40.

Sean McVay, Jared Goff, and the company will look to rebound on the road in Seattle where they have had relative success in the last couple of years. Under the McVay regime, the Rams have outscored the Seahawks and the 12th man 75-38 and will need to do it again Thursday night but with more of a balance than they had Sunday in the loss to Tampa.

On the other hand, the Seahawks will look to improve upon a solid showing against Arizona, move to 4-1 and show the NFC they are a team to be feared this season. It will be the mix of offense, defense and special teams that all need to click again for Pete Carrol's team to come away with the win in Rams vs Seahawks 2019 part 1.

Ram's Were Dismantled by the Bucs Week 4

If you had told me the Rams would score 40 points against the Bucs and not win I wouldn't have believed you! The Rams, however, could not stop the lethal combo of Jamies Winston and Chris Godwin as they tore them apart for 172 yards and 2 TDs.

The Rams offense could not get going as they would have liked as any game where Goff throws 68 pass attempts is going to raise a lot of questions. Even more so when Todd Gurley only had 5 carries, and while the Ram's were down early it doesn't excuse going away from such a big weapon. Again only beg's the question of if he is healthy or not. 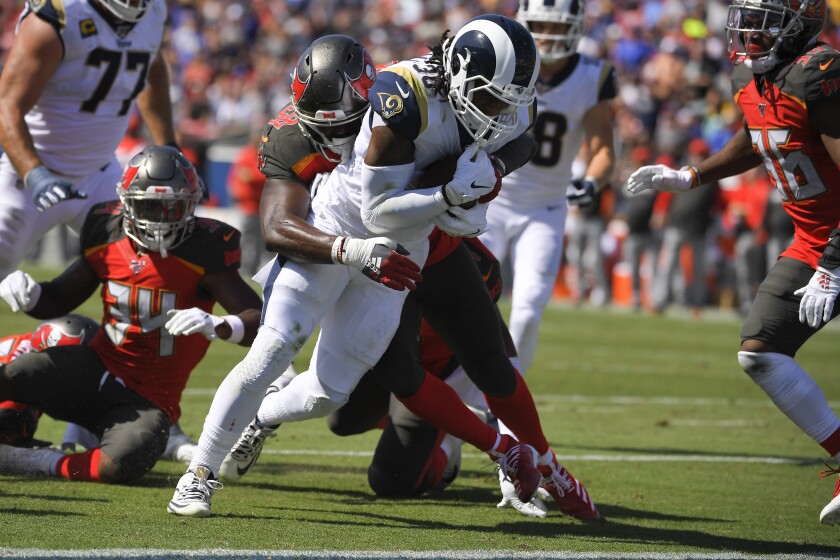 Tampa switched from the Blueprint for beating the Rams. They went for the shootout as they scored 54 points and made Defensive Player of the Year Aaron Donald almost invisible. head Coach Bruce Arians and Offensive Coordinatorclowney ByronclowneyJadeveon Clowney Leftwich used a lot of quick throws and wide receiver screens to get the ball into their playmaker's hands quickly.

Jared Goff will also have to have a bounce-back game after throwing for more than 500 yards but at the same time 3 interceptions and 1 fumble at the end of the game when the Ram's had a chance to tie.

It seems this season like there is some disconnect between Head Coach Sean McVay and Jared Goff and they will have a lot more of these moments going forward in Rams vs Seahawks 2019 and beyond if they can't figure things out. Goff can't be dropping back 68 times a game to pass or else...

Seahawks Cruise To Win in the Desert Against Arizona

Russell Wilson and the Seahawks are coming off a game against the Cardinals where they didn't have to do anything special to win. They were up big early after a Jadeveon Clowney pick-six and were able to have a steady mix of passes and run's to Chris Carson who kept the ball off the ground after several weeks of fumbles.

Jadeveon Clowney is an absolute force of nature 💪

He snags a one-handed pick-6 to give the @Seahawks a 10-point lead! #SEAvsAZ pic.twitter.com/yWanU9is3K

Seattle didn't have to do anything special Sunday afternoon but they will need to play a better game if they want to improve upon a 1-3 record the last 2 season's against the Rams. Keeping the running game going and trying to follow the blueprint that has been set by the New England Patriots and New Orleans Saints and we could see the 12th man leaving very happy.

It will also be important for Wilson not to get sacked! The Rams have the players to get to the quarterback and after the 54 points were given up last week I would imagine Wade Phillips will have things dialed up and ready to go. Aaron Donald has only one sack this year so getting the ball out quickly should be Wilson's plan the whole game Rams vs Seahawks 2019.

While both teams look to keep chase with the undefeated San Francisco 49ers coming into some big divisional games this week. It will be a chess match between Pete Carroll and Sean McVay. Both coaches will need to show things after shaky calls against the Saints for Carroll and last week vs. the Bucs for McVay.

The Rams will look to get Gurley more involved, and early after he only had 5 carries last game and it didn't seem like he had that many. They need to make him a main part of the offense and the play calls as Goff's play-action isn't quite as effective when Gurley isn't going.

Seattle will look to have a steady balance of Run and Pass action and hope that the extra serge from the home crowd will be enough to get them to 4-1 in Rams Vs seahawks 2019 Thursday Night Football.  The Rams might have something else to say about the result as they will be looking to improve upon their mistake-filled week 4.

Rams vs Seahawks 2019 might very well end up with Goff making a lot of mistakes after being down early. Prediction, Seahawks get an early led and Gurley disappears from the game.  Seahawks win 34-19 Since I got the last one so wrong can give my score again. Do not bet money on my prediction, I do not need that kind of bad Karma in my life.