It’s that time of the year again when we take a deep dive into the potential 2020 NFL Draft Linebackers Class.

This article, the 2020 NFL Draft Linebackers Top 10, will cover the best LBs looking to make an impact in the 2019 College season, before being drafted in 2020. So why wait? Let’s do this thing! 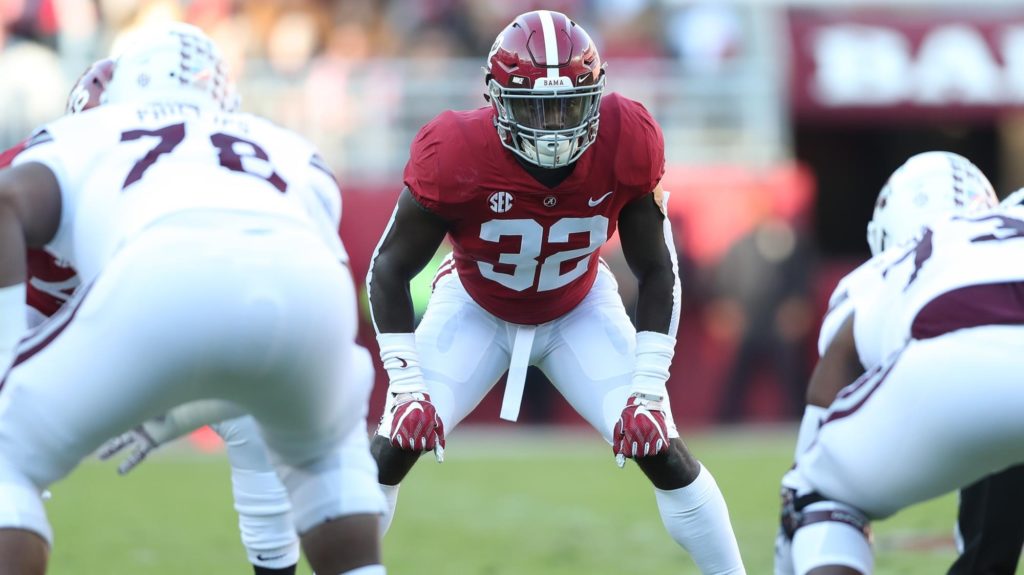 This kid is the real deal. He has been training to be a LB since he was 9 years old. He was attending LSU clinics at the age of 12 and was practicing with the first team at the age of 15. He is the perfect build to play LB, has the background and perfect training. Moses is competitive and has a great football IQ.

He was commanding the defense as a freshman; he is that good. Reads plays well and knows the game of football. Easily the best LB in the class.

He was committed to LSU for years and changed his mind and went to Bama. This pains me, but I know the reasons behind it. He is a certainty to be the first LB taken off the board in April of 2020. Guaranteed 1st round pick. Probably a top 15 prospect. 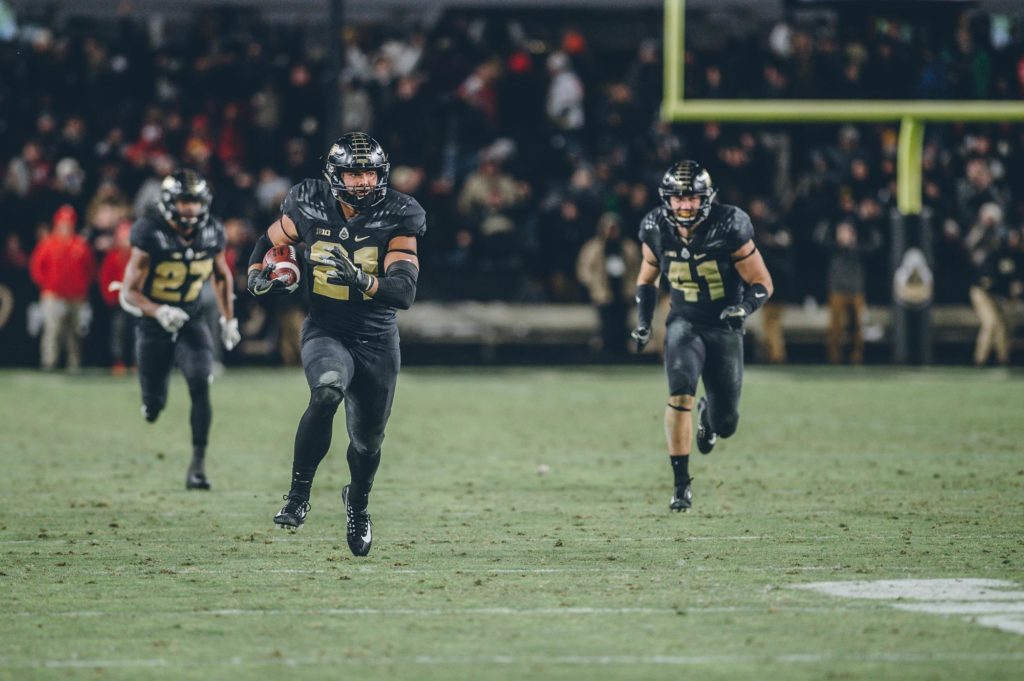 Bailey has incredible vision and reads plays well. He sees things most players just don’t see. He pursues the ball well which is evident by the number of tackles he makes, 310 across three seasons 26 of those for loss. His behind the line production is excellent and will be in his 5th year this season, injury-free.

He grew up in Ohio and wasn’t offered a scholarship by them, he was filthy. This was clear when he came up against them, he had something to prove.

He is a little under the radar as far as notoriety goes, but he has the goods to be a quality LB in the NFL. Look for him in the 2nd round. 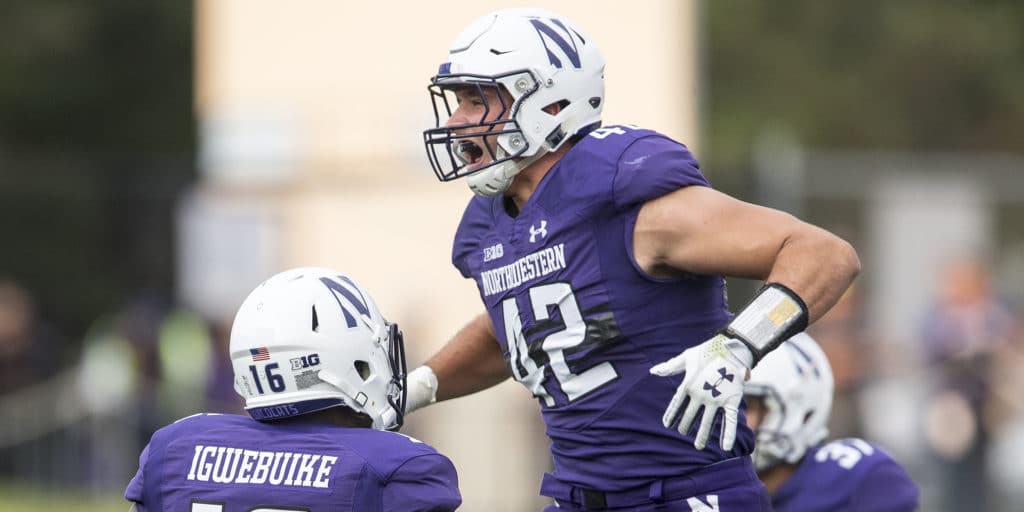 Paddy Fisher is a tackle monster who reads plays well and covers a lot of ground in the backfield. His competitive toughness is through the roof. As a redshirt freshman, he was one of the best LBs in the Big 10. He sees plays develop in front of him and love batting down passes. Forces turnovers at will and continues to grow into a fine LB for the NFL.

Needs to develop his pass-coverage game a little bit more, but he is on the right track.

He is sneaky good but under the radar. If he can continue to produce the goods in 2019, he will sneak into the 2nd round. 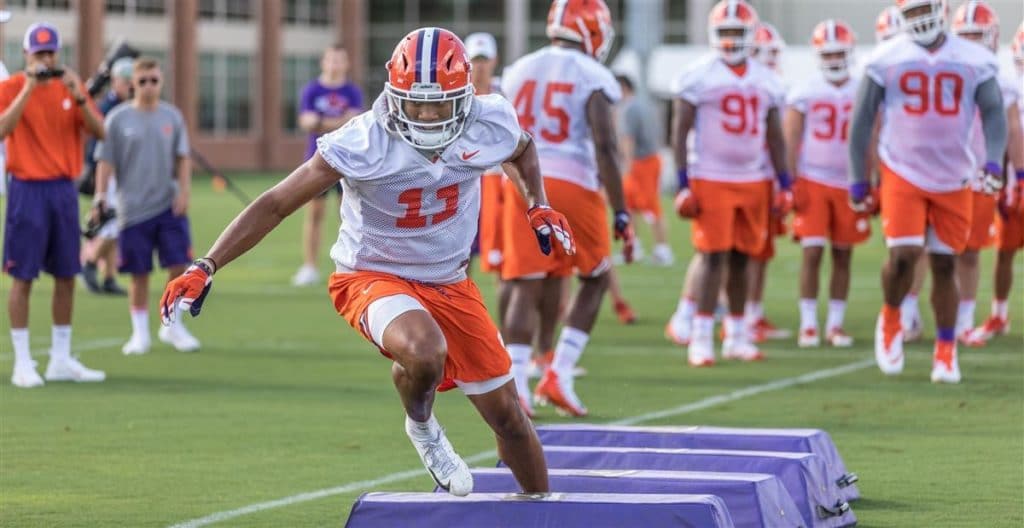 Simmons started out playing safety, but he would suit a LB role in the NFL. He does so much in the backfield, comfortable in man or zone coverage and is a reliable tackler. A great athlete with a WR mold. He was a relative unknown when coming to Clemson. They only recruited him two weeks before the season started.

Timing isn’t great, but he has all the right tools and continues to improve daily.

If he continues to improve his game, he could be a sneaky 1st round pick. 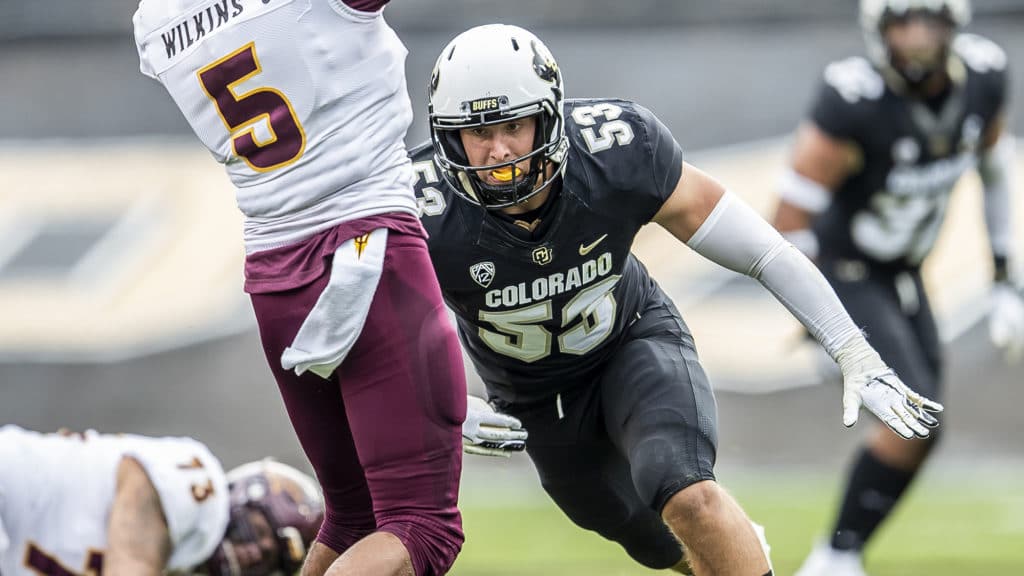 This is Landman’s year to shine. He has grown into a fine leader and a great player, but everyone around him graduated in 2018. He will also have a new HC and DC this season, this will be his biggest test to date.  He is physical, has a great frame and good speed. He shows patience and waits for his moment to pounce. He tackles well and guides his fellow teammates are the park.

Can be hit and miss at times, needs to be more consistent. 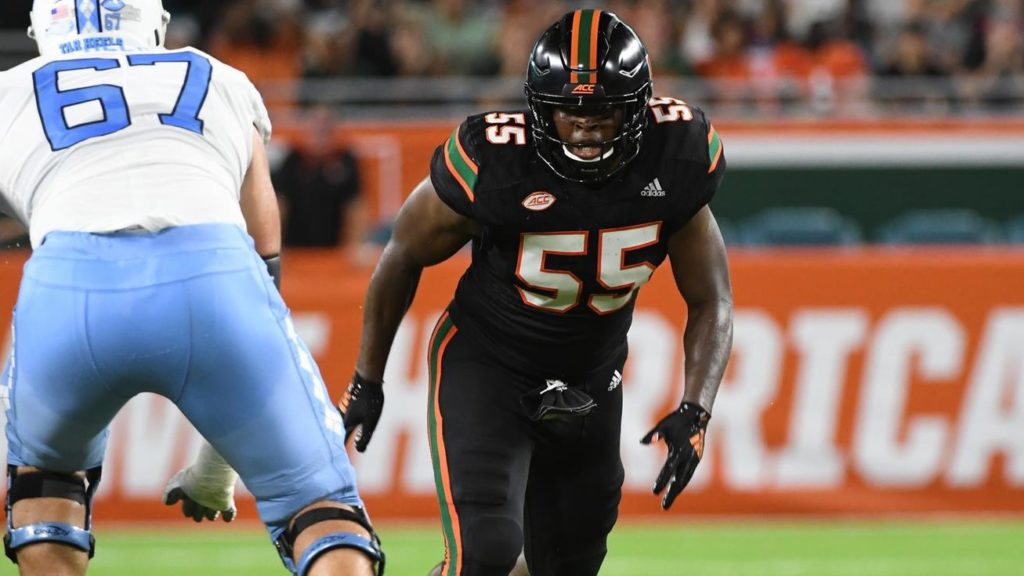 Great run defender. Had 86 tackles with 14 for loss and six sacks in 2018. He is quick and strong and has a great frame.

Is over excited at times and isn’t great in pass coverage. He goes too hard on plays; he needs to dial it back a little bit to be a three-down player in the NFL. Can rush into contact too hard without a plan.

You never want to tell a guy to turn down the aggression, but he needs to refine his game a bit more. The NFL will love his attitude and drive, but he needs to chill out a bit. Look for him in the late 2nd round. 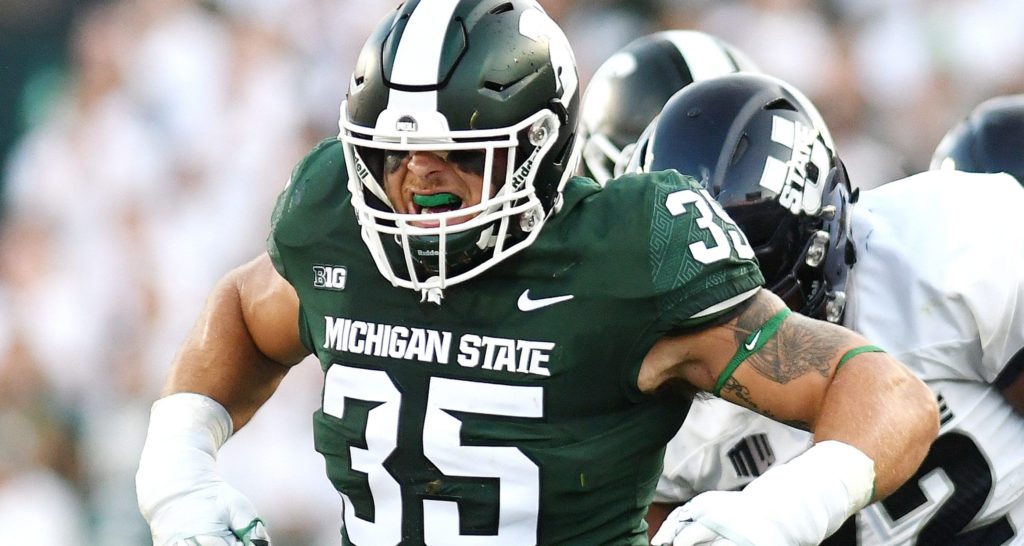 Joe Bachie is fun to watch. He has made over 100 tackles in each of the last two seasons. Michigan has produced a lot of excellent LBs in recent times and Bachie will be another. He defends the run well and has some coverage ability. Great NFL size and stature. He has been a 3-year starter who has plenty of game time experience as well. Could’ve come out in 2018 but wanted to grow into a better player.

Not a lot of athletic ability and isn’t great against the run. He has some things to work on, but he has the right foundation to be a solid player.

Has potential but needs to refine his game. 4th round. 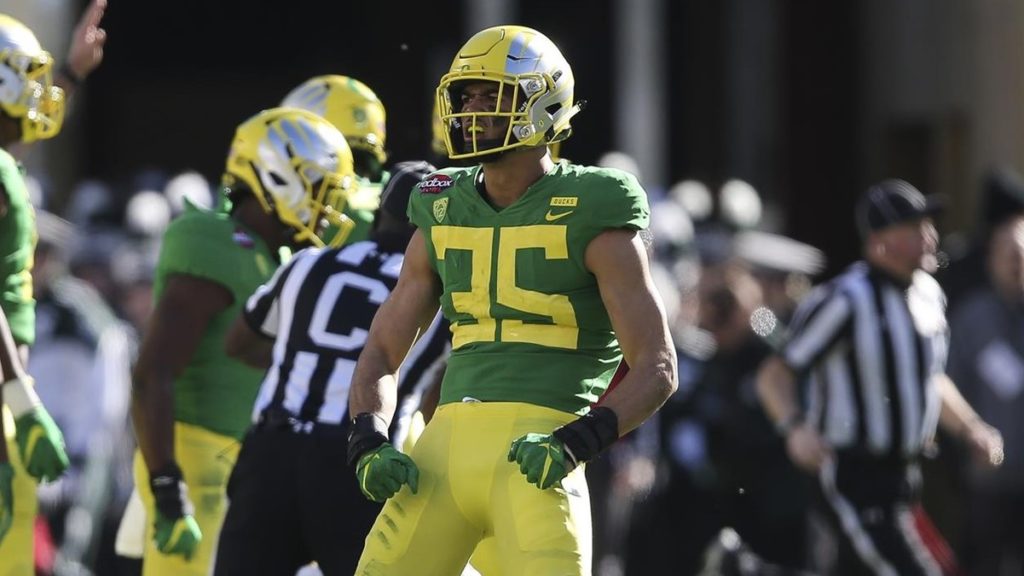 Dye is great in the backfield. He covers a lot of ground, drops into zone coverage well, tackles like a beast and is good with interceptions. Tonnes of production. Led Oregon in tackles all three seasons with over 100. A lot of NFL teams will like what he brings to the table. He reads the game well and organizes players around him.

Does nothing at the line of scrimmage. Has no functional strength, can get pushed around a bit.

3rd round for mine. He has a lot to work on when approaching the line. 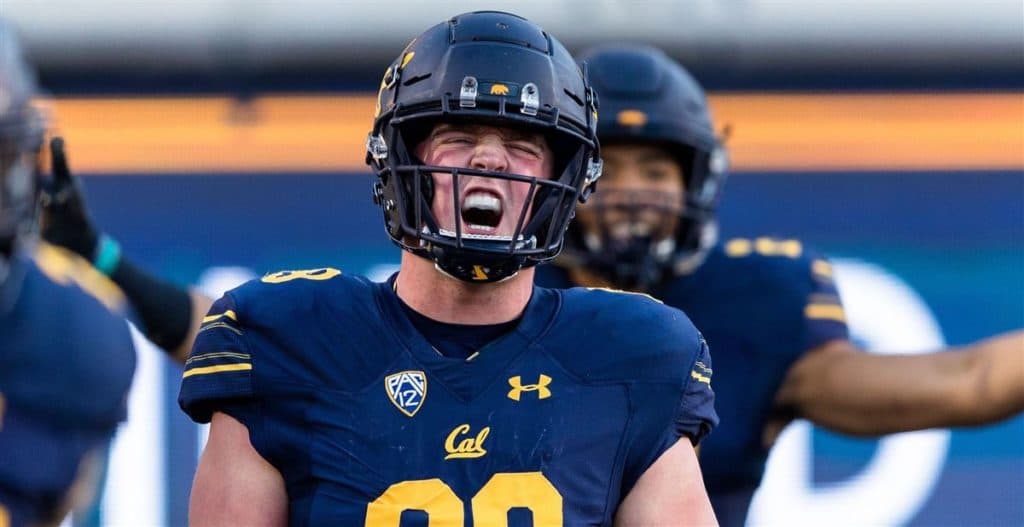 Weaver had a whopping 155 tackles in 2018. He is a machine. He has a big tackle radius and hits hard. The kid sees everything happening around him and reacts well to all situations. Has the size of a DE rather than a LB. Covers a lot of ground, just doesn’t do it quickly. NFL teams will love him for his drive and determination as well as his tackling prowess.

Bend and flexibility are non-existent.

Good footballing IQ will see him drafted in the 3rd or 4th round. Might not see him in year one of the NFL but you will eventually. 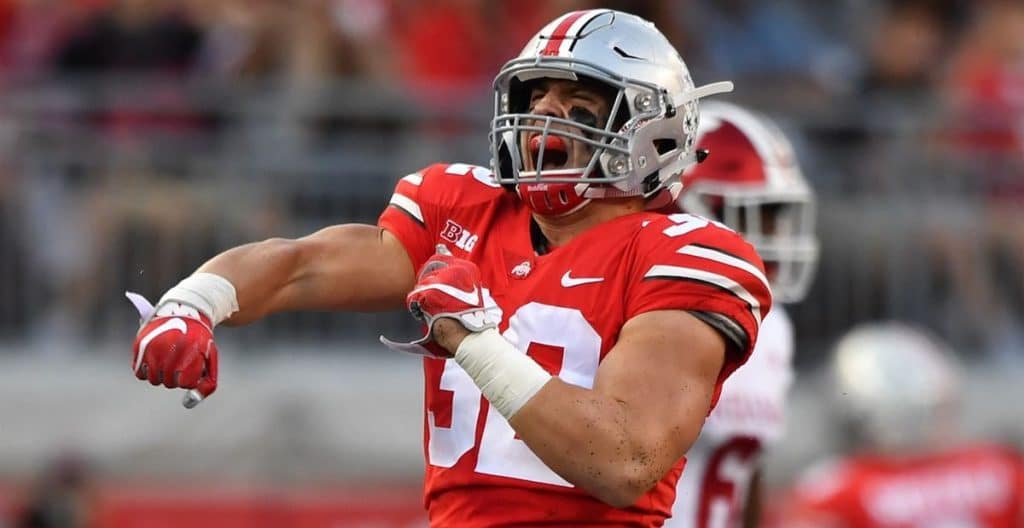 Borland comes from a family of former players and current coaches. The game is in his blood. He shows good speed and great hand placement to fend off players or make tackles. Vision is top-notch and he is very productive.

In 2018 he made 67 tackles and 3.0 sacks. The kid can play almost anywhere on the field and is a tough competitor. There is a lot to like about Borland.

Look for him in the 3rd round.

The Vancouver Whitecaps vs Toronto FC was able to lift a trophy for their supporters after a 5-3 victory on penalty kicks.

As the Cowboys’ offensive line goes, so goes the Dallas season. Where are they for 2022? 2 future Hall of Famers, a

The time for “tagged” players to sign a long-term deal has passed. They will play this deal under their 1 year tagged