Sunday afternoons Los Angeles Rams New Orleans Saints game will see a rematch of the controversial NFC Championship, two teams coming off wins but getting them done in completely different ways.  Both teams came into the season with high expectations and both are undefeated after the first week but baring a tie one will come out of week 2 with a loss.

The Los Angeles Rams are coming off a 30-27 victory over the Carolina Panthers where they were lucky the time ran out in the game. After a solid first half holding Cam Newton and the rest of the offense to only 3 points, It was a lot of the same Rams we saw last year with a bit more rest given to Todd Gurley after his end to the season last year and his injury concerns, they took a 23-10 lead with 2:51 left to go in the 3rd quarter.

The good thing might at least be Gurley looked like the rest helped as he had 97 yards. Jared Goff went back to his two favorite targets completing 8 passes to Robert Woods and 7 to Cooper Kupp. They were lucky to limp to the finish allowing Carolina right back into the game with poor special teams, A blocked punt and missed field goal against New Orleans and I don't think they will be walking away with a win.

The Saints also came off a narrow victory but unlike the Rams, they started slow and turned it on at the end. The Saints were down at halftime to Houston 14-3 and while it probably should have been 14-6 had there not been a blown call on the time by the Ref's (we are not going to get anyone Saints started on Ref's!). The Saints did what Drew Bree's has done for so many years and took to the air throwing for 370 and completing 74% of his passes and clawed back into the game.

I Guess we will see Brad! #LARams #Saints #NFL pic.twitter.com/Xym645rtGz

While the Saints were behind so it makes sense why Alvin Kamara had limited touches but he still managed to almost break 100 yards with a 7.5 ypc on 13 carries.  Showing why he is making the big bucks this year Michael Thomas had a monster game with 10 catches for 123 yards. The Rams will need to slow him down and Bree's down if they want to come out with a win.

Rams and Saint's Have Been Oddly Similar

No like really really oddly similar! In the last thirty-seven games since the start of the 2017 Season when the Rams hired head coach Sean McVay. Both teams have identical 27-10 records including playoff games and in that period, they are number 1 and 2 in the NFC in point differential with the Rams having a slight edge over the saints +283 to +278.  The Saints have allowed 22 fewer points in that span while the Rams have scored 27 more.  Oh, and they are both 2-2 in the playoffs.

While they have similar team numbers in the past 2 seasons there also seems to be some resemblance with Goff in the way Brees has started his career. Even their records weren't too far off with Goff going 24-14 in the regular season and Brees going 21-21. If the numbers to start are a tell for a promising career than Rams fans should start getting happy, they have nearly identical completion percentage with Brees holding a slight advantage at 61.3% to 60.5% but that is the only thing he leads Goff through Yards, 9581 to 8551. Touchdown and Interceptions, 65 TD's and 26 INT's vs. 55 and 38, and finally Passer Rating at 88.4% to only 83.1%. Long term though you can never tell with quarterbacks so hopefully they mean something.

Both teams have Superbowl aspirations again this year and we might be given a preview of another exciting playoff match up but for now, we have to look ahead to Sunday, September 15th. With the two teams starting and finishing their last games in such opposite manner I'm sure the Saints will come out with the "Start Strong" mentality while the Rams might go with the "Play a Whole 60 Minutes" one. They shouldn't have any reason not to come off both firing knowing the possibility of a head to head deciding seeding later on in the year.

For the Saints, it will come down to if they can control the ball and the clock and give it to Kamara and Murray as much as possible. This, of course, is predicated on not getting down early and having to make 43 pass attempts, not that I think Drew isn't up for it I just think he would be better utilized later on in the year.  Thomas will be a big body and look to take advantage of a smaller Rams secondary who are most likely still having nightmares from last year's Championship game.  The Defense will have to continue what they did in Houston with 6 Sacks and 8 Tackles for a loss, stopping Gurley early and not letting the offense room to breathe could help them in the end especially if they are able to control the clock and the defense is fresh. 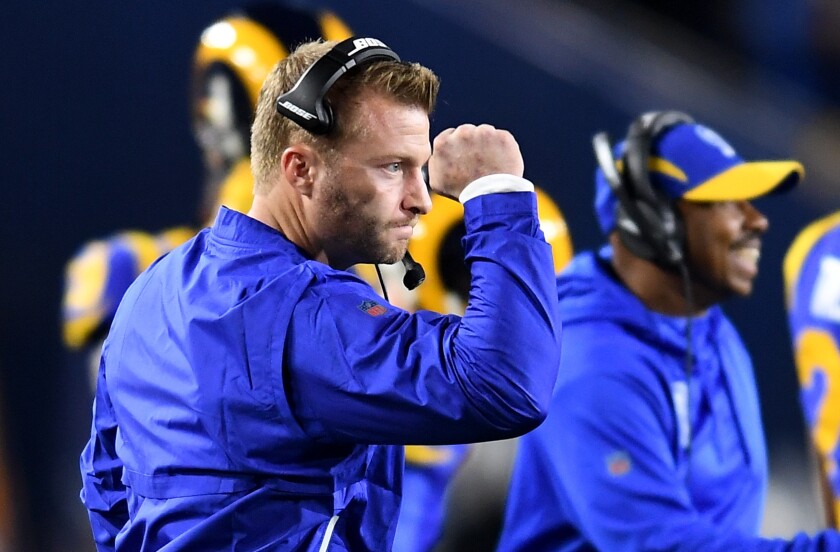 The Rams will look to do more of the same McVay play-action magic but I can see them trying to pass early and often to get a lead and force Kamara to be a receiver much like what they did with Christian McCaffrey. The one big difference for the Rams this game is they won't have to worry about a running threat from the quarterback, this should lead to more pressure than the last game where they were only able to get 3 sacks and 5 TFL's. It will be key to be in Bree's face early and often and with reigning Defensive Player of the Year Aaron Donald likely to receive the same double and triple teams he did last game it will have to come from somewhere else.

The Rams-Saints rematch is in Los Angeles this time and I don't see the special teams making the mistakes they did and leaving 10 points on the board like last game. I also think Sean McVay will show what he learned from last year's Superbowl defeat as a coach when it comes to the bigger games.

I predict the Ram's will win 34-30 but since I have no knowledge of anything on the inside and have only written 4 articles I will not be held responsible for any bets made on behalf of my prediction.